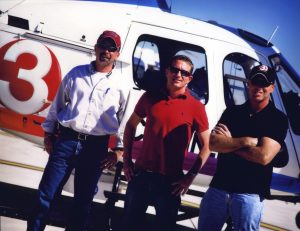 Gary Harper, KTVK reporter:
Having a bad day? Forget about it. Jimmy would slap you back into reality and push you harder than you thought you could be pushed. You loathed him for pushing … but then at the end of the day and your news report had aired … you loved him. You really did. You loved him … and appreciated him for making you a better journalist that day than you thought you could ever be.

He was also a mechanical genius. He took the engine out of his VW van just so he could tinker with the parts. He put everything back together … by the way. He also did the same thing with a motorcycle he had. As for his home … what a nut. He added on to his house, but never hired a contractor. He obtained the permits and did everything on his own!! Everything!! Wiring, framing, everything. I asked him how did he learn to do such a thing … and he simply replied, “I read books.”

I could go on and on about Jimmy … but I think you get the idea. He was such an incredible person who ran full-throttle all the time. Jimmy, you will be greatly missed…

I am a better person … a better journalist … knowing that he was in my life.